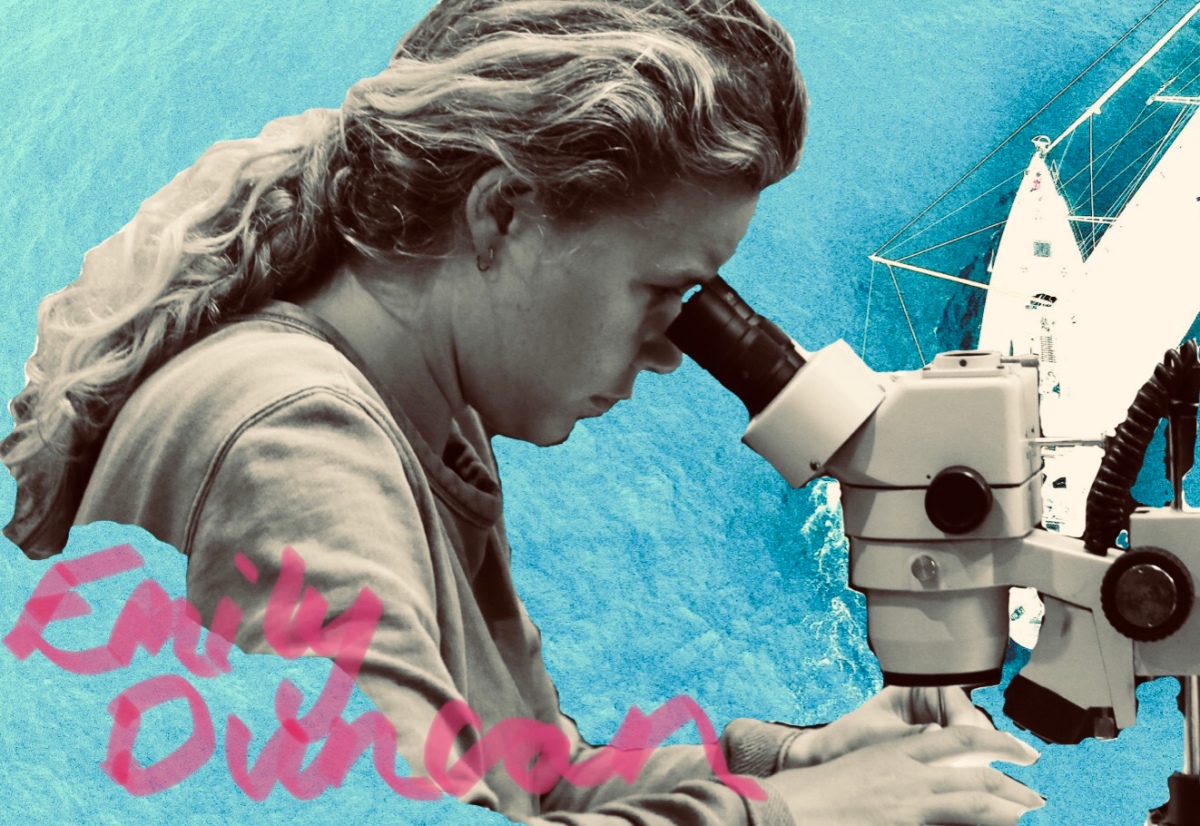 Bridging the gap of lacking gender and racial diversity in exploration, eXXpedition is a pioneering organisation that brings together all-female sailing crews, aiming to bring to light the current issues surrounding oceanic plastic pollution:

“eXXpedition – led by ocean advocate and skipper Emily Penn – was founded in 2014 to shift the way people feel, think and act by building a global network of multidisciplinary women who can contribute to world-class scientific studies, explore solutions, and use their unique skill sets to tackle the problem from all angles.”  – exxpedition.org

To be able to give women an opportunity for contribution to and visibility within such a critical field of science is both exciting and commendable.

Emily Duncan (our honorary Envirobabe) is a PhD researcher from the University of Exeter and Plymouth Marine Laboratory. In 2018, she joined eXXpedition on a voyage through the great pacific garbage patch, a leg which extended from Vancouver to Hawaii. As head scientist of the voyage, her main focus of research was on impacts of plastic pollution on marine turtles.

The work Emily undertook can be viewed below as TOMRA was commissioned to produce a mini-doc of the voyage:

I managed to personally catch up with Emily after the voyage and asked her the following questions (answers are in her own words):

Q. What were you expecting to see before setting off?

A. Through my work on plastic ingestion on turtles I expected the problem in the gyre to be quite severe. I think that it is sometimes portrayed as a floating island of plastic. However, in reality it is more of a soup of plastic all the way through the whole water column. But overall, I did not know what to expect the extent of the pollution to be.

Q. What impacted you/ surprised you the most during the voyage?

A. I think the thing that impacted me the most of realising the scale of the gyre and the plastic pollution. We were getting high amounts in our trawls for over 1000 nautical miles and over 2 weeks of sailing we would be seeing large pieces of debris very often.

Q. what was the dynamic like on the boat being all female crew?

A. We had a brilliant crew of amazingly inspiring women, which I feel very grateful to have met. We got very used to living on the boat very quickly working well as a team!

Q. what was the coolest thing about the whole experience?

A. To be able to visit somewhere so remote on the planet and to be at sea for a long period of time was the coolest thing probably, and to sail through so many different conditions and experience the change in climate between the start and the end point

Q. Has your perspective changed at all regarding ocean plastic?

A. It has made my passion for helping the marine environment even greater, after seeing the wide-reaching effects we are having to some of the most remote and beautiful places on the planet.

Emily has since gone on to work with National Geographic in their Planet or Plastic? Initiative, carrying out research along the Ganges river in India. You can read about that expedition here.

eXXpedition has also expanded and is currently carrying out a world-wide voyage to continue its research on marine plastic. They are still taking applications for some legs of the journey as I write. Despite my own lack of sailing experience, Emily tells me it is not necessary and that they are looking to recruit women from all walks of life. So, any ladies who want to give it a shot, the link is here.

The health of our oceans is a very important matter that impacts not only marine wildlife, but also life on land (unfortunately including us humans). Therefore, it is so important to understand how we are impacting the health of the oceans, whether it is directly or indirectly. Reaching a greater understanding will lead us to finding solutions for negative impacts and also being able to do as much as we can to maintain, if not improve, the overall state of the marine environment. Because, ultimately, we want to not only enjoy the beauty of a thriving ocean but continue to benefit from its resources for years to come.

So, how is the ocean changing and what can we do about it?

Here at envirobabe we have provided you a basic rundown of the most important facts and suggestions for ways you can do your bit to help:

① Its getting more acidic.

With increased CO2 levels in the atmosphere, more of it is also dissolving into ocean waters. More dissolved CO2 is what increases the acidity of the water. Global pH has already decreased by 0.1 and around a third of CO2 emissions created from human activity has dissolved into the world’s oceans. This shows how large of a contribution we are having on this phenomenon.

Changing water acidity has numerous effects on marine wildlife, the most concerning of which being the reduced rate of calcification for shelled animals which require alkaline materials for their shells to form. This results in negative knock on effects down the food chain. Other wildlife is affected.

One way humans can slow this process down is by reducing the amount of CO2we are producing on a daily basis. Remembering to turn out the lights in our homes, putting a jumper on instead of turning the heating up and buying locally are just a few of the many ways in which we can make a significant impact. And while you may be thinking, what’s the use? Ocean acidification is only going to keep happening. Well, research suggests that it may be the speed at which the acidification is happening that may be the real problem. Wildlife is not being given enough time to fully adapt to these new conditions. So remember that next time you leave your lights on, it all makes a difference!

② Its getting warmer.

Global warming is a problem for our oceans because as well as absorbing CO2 from the atmosphere, they also absorb its heat. Recent estimates put up to 90% of the heat resulting from human-made CO2 has been absorbed into ocean waters. This is causing the oceans to heat up much faster than previously thought. Ocean temperatures are predicted to rise 2-4°C within the next 100 years. Unfortunately, warmer waters help drive coral bleaching (not good) and dynamic ecosystem changes (not good). In fact, the heating up of the oceans is reducing the amount of oxygen available in the water. Therefore, this is also a problem for the wildlife that require oxygen to survive. If this isn’t even more reason to cut down on our carbon footprints, I don’t know what is!

On Yer Bike!- have you considered not only the environmental but healthful benefits of owning and using a bike to get around? Theres plenty of amazing stylish options on the market today, from hybrids to e-bikes!

For those with a larger budget, perhaps joining the electric car crew is a viable option? Just make sure you are near a charging centre!

③ Its getting over-fished.

Overfishing is when fish are being caught at a rate faster that they are able to replenish their populations. Due to increasing human populations, the increasing demand for fish is causing rates of overfishing to increase. This in itself has devastating effects to ocean wildlife and the habitats where the fish reside.

To combat this issue it may be advisable to cut down on your fish consumption and to make sure that any fish you do consume is from a sustainable source. Check out the Marine Conservation society’s Good Fish Guide here.

④ Its getting a whole lot of pollution.

Besides CO2, us humans are spewing out a cavalcade of pollutants into the oceans. It really lends to the modern phrase “The oceans are the world’s trash can”. We have a variety of unnatural chemicals making their way into marine waters (pharmaceuticals, sewage, detergents, fertilisers, oil, herbicides, pesticides and heavy metals) not to mention a recently invented material most commonly known as plastic.

Pollutants in the ocean combined with the stresses of a rapidly changing climate and increasingly acidic water results in concequences to the detriment of marine ecosystems. One example of this process is the impact of the chemicals Oxybenzone and Octinoxate. They are found in many popular sunscreens. They reach ocean water either directly by transferring it from your skin when you go swimming at the beach, for example, or through sewage treatment systems that do not have the means to remove those chemicals. Coral Reefs in Hawaii alone are exposed to over 6,000 tons of sunscreen lotion annually.

Oxybenzone and Octinoxate reduce the ability of corals to defend themselves against bleaching, a process which damages their DNA and stunts development. This threat combined with damage resulting from warmer temperatures and acidification, as well as other chemical pollutants, causes coral reefs to die off as they are unable to successfully reproduce and survive under such conditions. This problem then has wider implications as Coral reefs are essential in protecting coastlines from wave action, as well as provide shelter and habitats for a diverse array of marine organisms.

Organised beach cleans are gaining popularity as well as people sharing their clean ups on social media, garnering the rise of ‘plogging’. The ability to recycle has become easier in recent years. More and more eco-friendly sunscreen and cosmetic products are available today than ever before, as well as non-toxic cleaning products and plastic free household items. See our links below!

Attempting to make lifestyle changes can be very challenging. Thankfully, there are many useful and educational apps that can aid you (see below). At envirobabe, we like to think that it’s not about perfection when it comes to becoming eco-friendlier, but about awareness and simply doing what we can with the resources we have at the time. Feel free to comment below any more tips and tricks you have found on your journey to saving the oceans and don’t hesitate to ask questions too. Join the envirobabe tribe today and help to save the planet with women united, sharing knowledge and resources!

Miami Urban Green 💚💚💚
Another monday bites the dust 🙌🏻
MAJOR sexy young David Attenborough. and his coconuts. The OG envirobabe. You are all welcome. #woke 😍😍😍 .